Walk To The Heros

Finger Lakes 500: In Support of The Legacy Project

Hey everyone! Welcome to my next cycling/fundraising campaign which I’m calling “The Finger Lakes 500: In Support of The Legacy Project,” where I will be attempting to complete a 500-mile self-supported bike ride around all of the Finger Lakes in under 5 days and raising money for The Legacy Project along the way. I do apologize for the length of this post, but I feel like if I’m asking you to donate your hard-earned money to a cause I owe you an explanation of what exactly that cause is.

Have you heard of the Capital Region Veterans Memorial or what has become known as “The Legacy Project?”  Unless you live in the Scotia/Glennville area of New York or have ties to the veteran’s community there, I’m going to venture to say that you haven’t – let’s fix that.

The Legacy Project is a grassroots effort to create an amazing tribute to our veterans in the capital region of New York.  It will be a place to go, not only to honor our veterans, but also to educate those who may be unfamiliar with our country’s military history. The project includes plans to build a welcome center with a veteran’s café and separate memorials honoring all major conflicts including WWI, WWII, Korea, Vietnam, The Gulf War, Iraq, and Afghanistan. The concept really does look beautiful, like something you’d expect to see in larger city — take a look for yourself below or visit the official website: https://capitalregionveteransmemorial.org.

I first learned of the project from my uncle, Larry Zeglen, who is not only a great uncle and mentor but is also the VFW Post 4660 Commander as well as an integral part of the project’s advocacy team. After hearing the passion for the project coming directly from one of the men that inspired me to serve I was in. I wanted to help, but wasn’t sure what I could bring to the table. This was until I had the idea to combine my new love for bikepacking with a fundraising campaign for The Legacy Project.

I completed my first self-supported bikepacking trip, a 250-mile route through the Adirondacks over the course of 3 days this past June in support of The Great Cycle Challenge. Like anyone who achieves their first milestone, I hadn’t been off the bike for more than a few hours and my mind was already churning about what the next bigger, badder ride was going to be. I knew immediately that I wanted to double my mileage – so I opened Google Maps and started looking around for potential 500-mile routes. I also knew that Bri and I were about to hit peak wedding-season with PLV so Fall would likely be the best time to make it happen. While I was zipping around on Google Maps, Bri says “the Finger Lakes are  beautiful in the Fall, why don’t you ride around them?” At first, it sounded kind of crazy. This was also when I thought there were only 5 or 6 lakes – a quick Google search proved me wrong – there are actually a total of 11 Finger Lakes! But after quickly building a rough route moving West to East hugging the shorelines of each lake as closely as possible, I found that it put me right in the 500-mile range. It was perfect. It quickly became the goal for my second-lifetime bikepacking trip, and the fact that I’d be able to contribute in a small way to The Legacy Project made it just that much more special.

Why donate to a project that isn’t breaking ground where you live? Because a good cause is a good cause. Because if we make The Legacy Project a reality maybe it will inspire other cities and towns across America to do something similar. The sad fact is that the WWII generation is almost gone and we now have young adults who weren’t alive for the attacks on September 11th, 2001. Not only will sites like the Capital Region Veterans Memorial serve as a place of remembrance for our veterans and their families, but also as a place of the education we so desperately need.

If you made it this far, thank you for taking the time and considering a donation to this cause. Please share this post to any and all who may be interested and follow me on Facebook and Instagram for updates on the upcoming ride, which begins on October 7th, and fundraising progress! Thanks!!

**Big shout out to my sister, Meg Pisani, of Berkshire Photography and Design for hooking me up with this sweet logo! We may consider selling shirts, hats, or koozies with this logo as a part of the fundraiser based on interest! 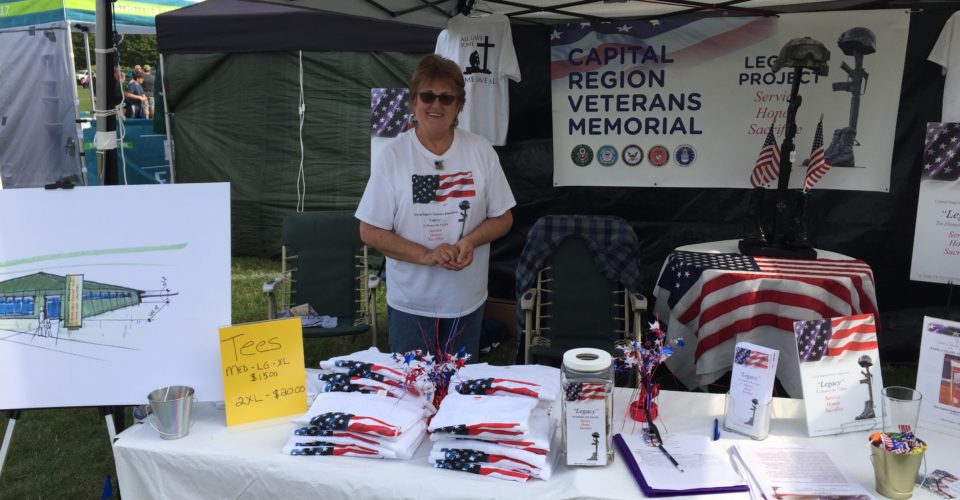 The Legacy Project at Oktoberfest